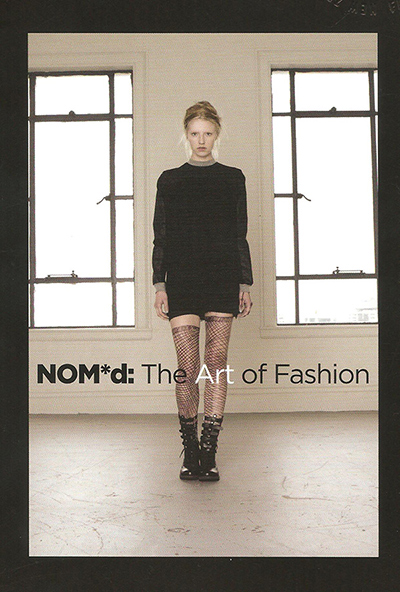 NOM*d: The Art of Fashion

By Hilary Radner, By Natalie Smith

Loading...
The ebook, NOM*d: The Art of Fashion, invites the reader to consider what happens when we think about fashion as art. Edited by Hilary Radner and Natalie Smith, the publication was View more
Save for later

Veteran fashion writer Cecilie Geary says she loves fashion but that it's not just the clothes she's interested in. "I must have been about 15 when I picked up my first book on fashion history and what began as idle curiosity developed into a lifelong passion." Cecilie began her fashion-writing career in 1956 as a copywriter in the advertising department at the DSA, a major Dunedin department store. Newspaper advertisements were prodigious in those days and it was her job to write the words - copy, as it was called, hence the term copywriter - to accompany the images. She recalls that, due to import restrictions imposed in 1938 and not lifted until 1984, most of the fashion stocked by the store was New Zealand-made. "New Zealand had a flourishing fashion industry back then. There were many clothing manufacturers located throughout the country and they employed thousands of people. " After a short stint as a radio copywriter with local Dunedin station 4ZB, Cecilie set sail for London in the early 1960s where she worked for two years as a copywriter in the advertising department at Selfridges, then one of the biggest department stores in the world. As well as writing the store's fashion ads, she wrote the scripts for fashion shows presented in a smaller store owned by Selfridges in one of London's outer suburbs. In 1966, Cecilie Geary settled in Auckland where she lived for the next 36 years. Her first job there was as senior copywriter at a small downtown advertising agency, Wardlaw Advertising. The appointment was short-lived. "Our only fashion-related account was Holeproof, who made hosiery and mass-market leisurewear, so I decided to move on and chance my luck as a freelance fashion writer." A meeting in 1968 with Maysie Bestall-Cohen, fashion model and co-owner with her husband Richard of the June Dally Watkins Deportment School and Model Agency, led to a professional relationship which lasted 30 years. During that time, Cecilie wrote the fashion commentaries for most of the Auckland fashion shows Maysie co-ordinated and compered and also the Benson & Hedges Fashion Design Awards presented by Maysie in Wellington, and screened live on television from 1982 until 1998. Writing the Benson and Hedges commentaries over such a long period, Cecilie had to describe thousands of outfits of every description from the elegant to the decidedly weird. "It was certainly a challenge," she admits, "but I generally managed, with the help of my trusty Roget's Thesaurus, to find the right words." Cecilie remembers the independent fashion shows in Auckland in the 1980s with a sense of loss. "They were part of the culture of the time - spectacular presentation, hundreds of guests in black tie and evening dress, glamorous venues, champagne flowing like water. Then came the 1987 stock-market crash and the bubble burst." Cecilie's first foray into print was in the 1970s when, with Maysie, she produced a fortnightly fashion page for the Auckland Star and an occasional fashion column for the American Express house magazine Insight. Freelance fashion articles for More magazine followed. Cecilie describes More editor Lindsey Dawson as "most encouraging, a true professional." In 1985, Cecilie joined the Fashion Quarterly (then Fashion NZ) team, initially as a contributing writer then as features editor in 1987 when the publication moved to Auckland from Christchurch. Being the only writer on the staff at that stage, it fell to her to write everything in the magazine other than the articles she commissioned and those brought in from overseas. Her association with Fashion Quarterly, on a full-time and later a part-time basis as fashion writer and beauty editor, lasted until 2000. Despite being surrounded by the latest fashions at the magazine, Cecilie says that although she liked looking stylish, she never aspired to be a fashion plate. "Much as I enjoyed the fashion, my involvement was, to some extent, voyeuristic. Taking pleasure in the clothes didn't necessarily mean wanting to wear them." After leaving Fashion Quarterly, Cecilie Geary's working relationship with former FQ editor Paula Ryan resumed when she became a contributor to Paula's new fashion magazine Simply You. At the same time, she worked on a freelance basis for Style magazine edited by Tracey Strange. Her title was senior editor fashion and beauty. Cecilie's writing style remained consistent throughout her career. She always included extra detail to enrich the experience of the readers. Her fashion features referenced literature, art, film and history and her beauty reportage was never just about pushing product. She had the ability to make even a commonplace lipstick sound more interesting. In 2004, the Auckland department store Smith & Caughey's commissioned Cecilie to write their history. The company, founded in 1880, was celebrating its 125th anniversary the following year and wanted a coffee-table book written to commemorate the occasion. Involving, as it did, Auckland history as well as fashion, Cecilie says it was one of the most enjoyable projects of her career. The book took her a year to research and write. Cecilie Geary moved back to Dunedin to live in 2003 and, today, writes almost exclusively for the New Zealand Fashion Museum archives. In 2014, she wrote a lavishly illustrated fashion career memoir, Being There, which she donated to the museum. Cecilie says she can't imagine ever becoming bored with fashion. "My sense of admiration and awe whenever I clap eyes on a well-designed, beautifully constructed garment has never left me, just as my excitement on discovering a little-known historical fashion fact has never waned. To paraphrase Samuel Johnson: 'When a woman is tired of fashion, she is tired of life.'" Read more about Cecilie Geary's experiences as a fashion and beauty writer in the New Zealand Fashion Museum publication Being There. - See more at: http://www.nzfashionmuseum.org.nz/fashion-story/cecilie-geary#sthash.YJYUSRjH.dpuf
Close